What put a smile on your face today?

#46,861
Wade Garrett said:
I'm am now officially on holiday, we've just found that season 3 of RuPaul's All Stars in on Now TV and are a couple of episodes in (the shade!), I'm having a few ciders and am feeling pretty chilled.
Click to expand...
So..... shorts and a knotted hankie hat ?

#46,864
sparrowsblade said:
Seeing weather that isn't rain for a change
Click to expand...
While the sun may be in the sky, there still isn't any toilet roll in the house.

#46,865
Two gigs in two days! Played a local gig in Aberdeen on Friday followed by another in Glasgow at Ivory Blacks last night. Having different bands/set lists for each was a bit of a challenge but all good in the end

#46,866
Thanks to ThomasIV's GAS thread post about the Fender Pro Junior IV, I have recalled my former thought processes regarding low-power tube amps. That, in turn, led me to recall the Zvex Nano and start researching subminiature tubes (the Nano uses a pair of 6021 subminiature tubes). I have since found a number of quite intriguing subminiature tube amp projects, including adaptations of the Marshall 18W and the Trainwreck Express.

Though I am still wary of the dangers inherent to a high-voltage electronics hobby, I am quite tempted to try my hand.

#46,867
sparrowsblade said:
Seeing weather that isn't rain for a change
Click to expand...
Personally, I'm happy seeing some nice, cool rain on the weather report for a change, but mostly because it's been like 80F for 2-3 days, and that just ain't right. It's freakin Winter still, man... it ain't right!

#46,868
Ripley likes to climb into our drying cupboard and take a MASSIVE bite out of any vulnerable or exposed toilet rolls.
She does this to remind us HOW MUCH she *loves* us while we’re sitting on the loo thinking “FFS, how am I going to unroll THAT?!”

Still haven't got the hang of Thursdays

#46,869
everfreetree said:
Personally, I'm happy seeing some nice, cool rain on the weather report for a change, but mostly because it's been like 80F for 2-3 days, and that just ain't right. It's freakin Winter still, man... it ain't right!
Click to expand...
Hopefully it actually cools things down for you. We got about a 10 degree dip, but it went right back up as soon as the rain passed.

#46,870
everfreetree said:
Personally, I'm happy seeing some nice, cool rain on the weather report for a change, but mostly because it's been like 80F for 2-3 days, and that just ain't right. It's freakin Winter still, man... it ain't right!
Click to expand...
Yeah, my gas bill was $35 this month.

And that's just because I was a wuss some days and wanted it really toasty in here.

#46,872
I just realized that my current cab (an oversize, closed-back 1x12 loaded with a small-magnet Weber Gray Wolf, 96dB sensitivity) is 8.5dB less sensitive than my first cab (an oversize, open-back 2x12 loaded with an Eminence Wizard and a WGS HM75, 104.5dB combined sensitivity). Whereas my current cab is fed 20W, and I will probably order a weaker amp to replace it soon, my first cab was fed with 15W per speaker: the weaker amp I have in mind would see my new cab max at 103dB, which is 16dB quieter than my first cab's max.

I am very glad that I did not damage my hearing back then, and I am quite happy that I have learned more about sound pressure since. Were I not so happy with the Gray Wolf, which took me nearly two years to afford, I would lower the sensitivity another 2–3dB by using a Weber DT12 with a “British” cone and dust cap.

#46,873
alonious_monk said:
Realised my 2x8 cab is 16ohms, and the ext. cab for a C30 needs to be 16ohms...so I can hook this configuration. This is going to be interesting. Wonder what this is going to sound like. 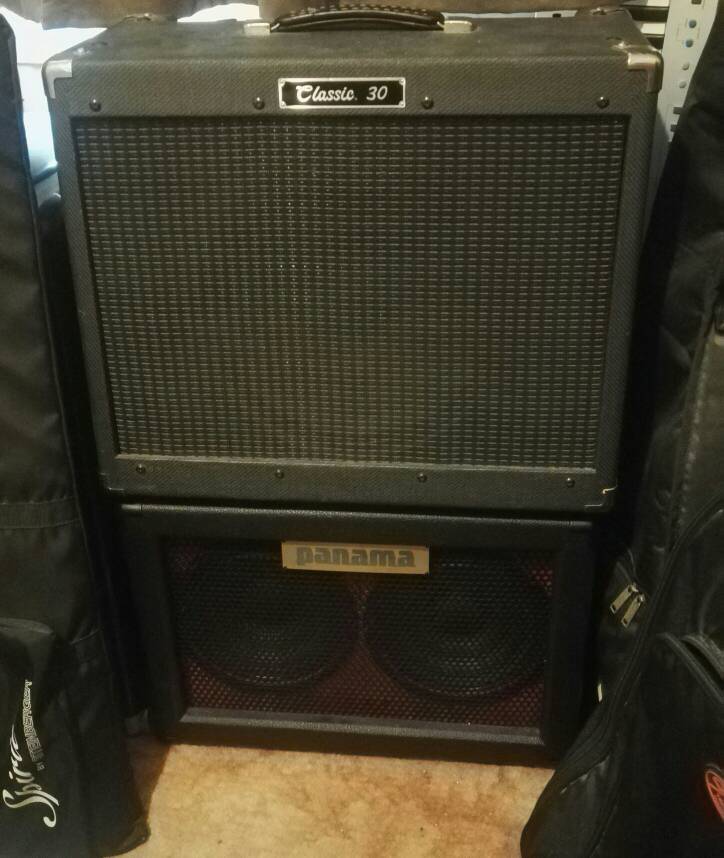 Sent from my PLK-L01 using Tapatalk
Click to expand...
The answer to my own question is this sounds AWESOME together.

The 2x8 doesn't like the mids to be too OTT so when I back them off to about 4, and keep the treble and bass to 12 o'clock, the 2x8 response so well. And it puts out a fair amount low end too. Surprised (pleasantly so) how well these compliment each other.

Loving this configuration, the C30 is no longer gonna go up for sale, this setup sounds too good let it go

#46,876
The bird who just slammed into my storm window flew away relatively unscathed. Yes, I am quite glad that I happened to delay that drink of coffee.

#46,877
A squirrel just decided to sit on the exterior sill of the window next to my desk; all was chill until (s)he decided that my swiveling in my chair was threatening.